After eight months of preparing, weeks of not being able to fly because of various reasons, and hours of studying, I finally was ready for my checkride, the pinnacle of any student pilot's career. A moment to prove how much they know, and to demonstrate their proficiency in the airplane.

I started my day off by waking up at 5:30am, getting dressed and grabbing a glass of water and the weather before getting in my car. It was cold and windy out, so I wore a crewneck, which I would later come to regret. As I drove the 50 minutes to the airport, I kept going over everything I knew in my head, hoping I would not forget any of it in some freak space out.

Ashton was already at Schilling when I got there, but Bob, the manager, was not. After sitting in our cars awkwardly for 10 minutes, we both got out and started to go over the mornings weather brief on my iPad, to ensure that I would not see anything I was unfamiliar with on the oral exam. Eventually Bob arrived to unlock the door, only to find it had not been locked the entire time to our surprise, and had we only tried it, we could have been inside where it was warm and we had a good wifi signal.

We went inside and started pre-flighting the airplane, but about half way through, Tony Condon, my examiner, arrived. Ashten went inside with him to go over the aircraft logbooks and my logbook, to ensure everything was in order while I finished the preflight. Once I finished, I went inside and we made small talk for a short while, then Ashten left and it was time for the exam to start. I paid Tony his $650 examiner fee, which he collected before the exam started. We made sure all the paperwork was signed and I had everything ready, and then the questions started.

The oral exam went on for just over two hours, during which, while being extremely stressed, he only asked one question that I did not know the answer to, simply referring to alternative engine air intake in the case of a dirty air filter. Before I knew it, he was standing up and congratulating me on passing the oral portion of the exam.

We went outside to the aircraft and I did another quick walk around preflight to make sure nothing had changed since my last check. Then we checked the weather, and I was crushed to realize that the clouds were 100ft too low for us to take off legally (we need the clouds to be at least 1500ft above the ground). We sat on the ramp with the airplane for about an hour and a half before the weather finally updated saying that we had about 400ft clearance for a legal takeoff.

We got in the airplane, and I started going through everything as normal. We obtained our clearance, took off towards the VOR, then turned and headed West just as I had planned in my cross country. After about 15 minutes, he diverted me to Hutchinson, and then we went into the simulated instrument portion of the flight, during which I was not allowed to look outside at all. Then we went into slow flight, steep turns, stalls, and finally finished with rectangular course, the one maneuver that is almost unheard of on exams. Finally, he said what I was waiting for and told me to head back to the airport.

I got our updated weather, new clearance, and we headed in for some touch and go's on runway 36. First we did a short field landing, which involves clearing an obstacle at 50ft and touching down on a point. I also added a forward slip into a perfect landing, before following with the associated takeoff. We did a soft field landing next, and then a go around to prove that I knew the procedure in case of an emergency. Finally we transitioned to runway 35 and did a normal landing. We taxied back to Schilling, and as soon as I turned off the plane, he looked at me and said "Congratulations, you are now a private pilot."

After I calmed down from my excitement, we went inside and signed some paperwork, and then I took some photos and enjoyed the rest of the day with my newfound abilities. 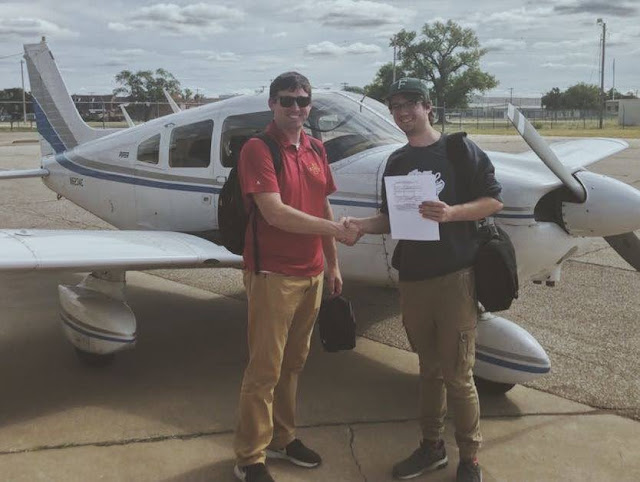 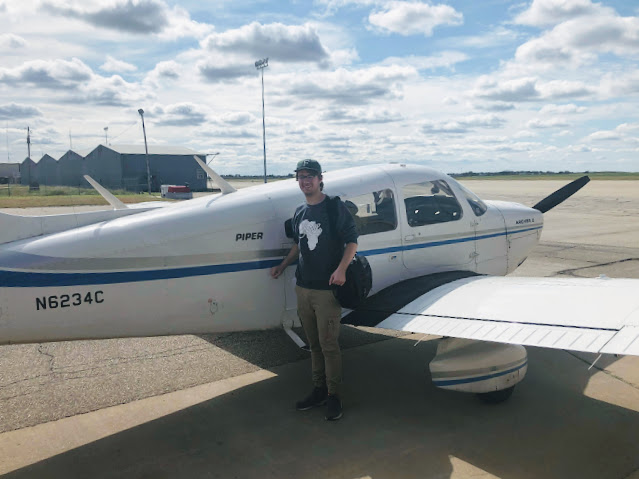 The amount of time from first flight to last flight as a Student Pilot was 53 flights, over 1136 days, for a total of 76.6 hours, 3 airplanes, 2 instructors, and $13,804.37 (which would have been much cheaper had it been completed in a shorter amount of time).