This morning started out as any other morning might... I slept in a bit and then got out of bed. This was my first night sleeping in my new apartment and I've noticed that my definition of sleeping in has changed hugely. Because the sun shines in the windows right away in the morning, I'm lucky if I can sleep until 8am, instead of getting to sleep until 10 or 11 like I used to. I did some cleaning and preparation, because Johnna was coming over later as it was our 6 month anniversary from when we started dating. I showered and got cleaned up, and then at 2pm I drove to her house and picked her up. We started by going to A&W and getting a giant root beer float, and then went for a hike at Dunton Locks. The hike wasn't too great as the mosquitos were so bad that I started to get hives on my arms. After we finished our hike, we went to the Boys & Girls club, and spent about an hour picking out date night outfits for each other. After we both were all dressed up and looked super cute, we went to WalMart to grab some groceries, and then went back to my apartment where we made grilled chicken breasts and Mexican rice which I made in my new rice cooker, and it tasted really good except I forgot to season it. After we finished eating, we watched Star Wars, and then I brought Johnna home and then watched TV and cleaned and did dishes before bed. 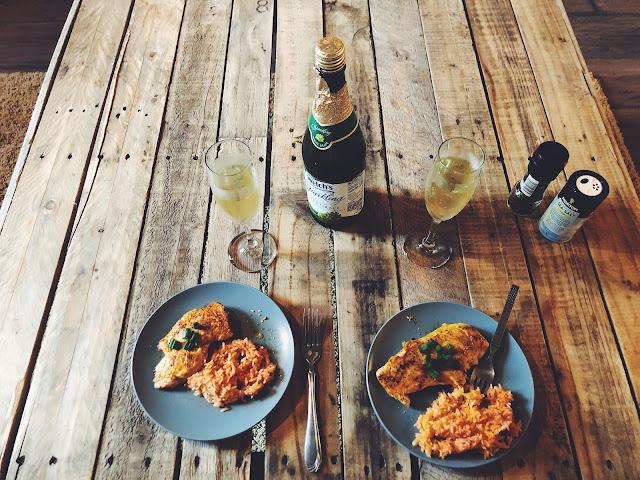