I woke up this morning with two strangers in my room. It was a little weird, so I just went to the bathroom and got all cleaned up for church. I went downstairs and got to know everyone, and then some people showed up with egg bakes and muffins, so the 7 of us (Myself, the two guys who stay in my room, a girl from their group who's staying next door, their leader, and the elderly couple who brought us breakfast) had breakfast together, and then we all walked the 2 blocks to the church. We met a bunch of people (including the professor who I would be studying under if I go to Tabor for music) and then went to Sunday school, which was a really nice class. The main service was also nice, and then afterwards we all rode back to Tabor in the van where they had pizza for us in the LCR (library conference room). Around 12:55, everyone else who didn't fly in started arriving, and so I got to see all my friends again and there was a lot of hugging and being happy, and then I got to meet a bunch of other people who I didn't know, so that was really cool. We kicked off the week with some general guidelines and expectations, and then went outside and played some kinda lame get to know each other games. Then we went back inside and had our first session, which was about living with intentionality. Afterwards, we went over to the Art Center, and played more games, then had dinner, and then one last session before more games in the Art Center until about 9:50, when we all went back to dorms, and ended up going to bed around 10:30. A really fun and great day.

One thing they had us do at the end of the day was go around and each say the moment we felt most alive, and the moment we felt least alive. For me, the moment I felt least alive was during the church service, as it was really hard not to over analyze everything as the worship leader would be my professor, and the moment when I felt happiest and most alive was during registration and I was seeing all my friends who I haven't seen in a few months and getting to know new people (especially a few of us who just instantly clicked and became like best friends).

Also, I am trying to live in the moment, and haven't been taking pictures, but they have a photographer on staff so I'll uploaded photos once he sends me the photos after the retreat. 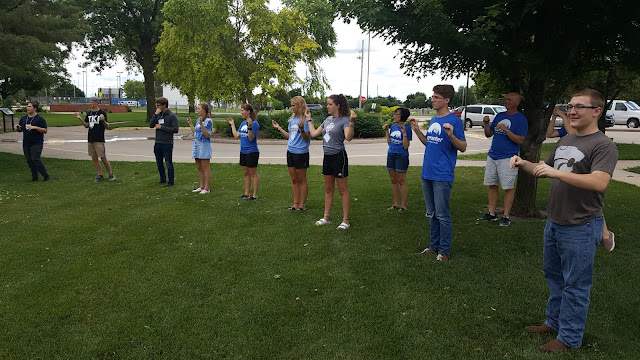