Today we woke up for the last time, as it was the last day of camp. We went down for breakfast, which was oatmeal and sausage, and then we had a perhaps over the top end of week flag raising ceremony which included fancy formations and running into the pond screaming about non-existent bee's. After our Morning watch, Dude let us quick shower and then we had our last Bible-X before heading off to Activity 1 (yes, it was waterskiing for me). We came back for tuck & pack, which was basically get any last things from the tuck shop and pack/clean our stuff. After cleaning, we had lunch, which was corndogs again, and then it was time for our very last Built Session. We basically talked about what our goals were for the rest of the year and some possible times we could meet up. Then it was back down to the dining hall for the closing ceremony. After the ceremony, we did worship and then it was goodbye time. Mom had come to pick me up with Dawson, Steven, Jana, and Tevia, and they had already signed me out so we just grabbed my stuff and went home. I relaxed for awhile, then we went over to Grandpa and Nana's for swimming, and then back to our house for dinner. Tevia and I left for the free movie at Harvest Fellowship, which was "I Can Only Imagine" which was like super good, but a little disappointing. After the movie was over, we came home and went to bed. Felt weird to have an entire room to myself again. 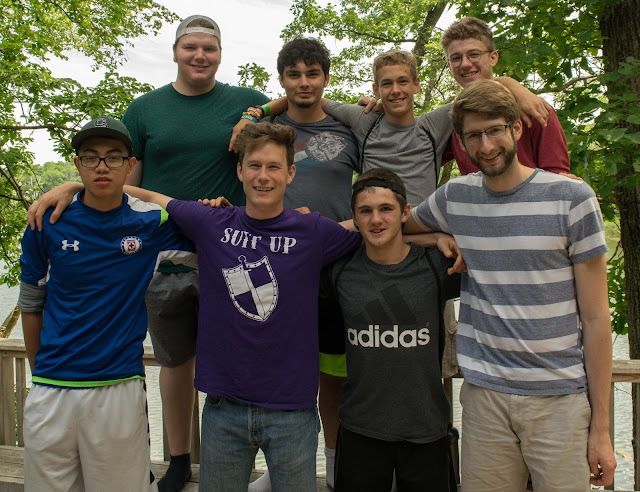 Things I liked:
The Food
The Built Sessions

Things I didn't like:
They spent so much time telling you how
to spend time with God that they didn't really give you
any time to actually spend with God.

Things I'll remember forever:
Sleeping on the island
Kieler's outloud reading of Song of Songs during rest hour
Running into the pond during the final flag-raising
Eating 121 corndogs as a group