Is the Bowling Alley more Expensive than a Theater?

Ben woke us up sometime this morning, but I just went back to sleep until I actually had to get up. I was a little sore from sleeping on the floor, but that's a small price to pay for nothing. We got ready to go, and then went back to the church from Yo Handyman Dave's house. We got there around 9 AM, and breakfast was like a cheese egg hotdish thing and sausages or something. After breakfast, Chloe, Kylie, and I practiced for the morning worship, and then we did it, with me completely going blank on the chords for the last song, "Great Are You, Lord." Then Dave tried to trick us into taking a $20 bill from a giant rat trap, that was very real. Then he switched it out for a fake one and stuff so it was fine. After the morning session, which was Dave talking about stuff, we had some games before lunch, which involved blindfolding people and having them try to guess who someone was by only their voice. Sometime during breakfast, a bunch of other people came too, including Nate, and so that was really awesome. We had lunch, which was like this amazing tatertot hotdish thing, and then we just messed around upstairs until it was time to go into town to the bowling alley. Ron was driving one of the white trucks, and Ben was driving the other, and there was a little bit of a NASCAR mentality going on there. We got to the bowling alley, and we got into our shoes and filled up 6 of the 8 lanes. We played and played and played, with me winning our lane's game with a score of 99. Then we went and got a pitcher of Pepsi ($6.50) and a basket of fried stuffed peppers ($7.50) which Koby, Hali, Cortney, and I ate while we watched everyone else bowl. We went back to the church after a few hours of bowling, and we played some rather violent games until dinner. Right after dinner, Chloe, Cortney, and I, went upstairs to practice for the evening worship with this kid named Josh who played a bongo drum. We did Days of Elijah, Oceans, O Come to the Altar, and Reckless Love for the evening set, and then Ben gave the first part of the evening session, with Dave doing a big lightshow on the Easter story for the rest. Then after that, they did some songs played on the computer, and then we played more games. We tried playing Jailbreak outside, but it was really cold and Matthew tried throwing me into a snowdrift.  Around 10:30 or so, Tristan, Danny, Chloe, Josh, and I, ended up singing in front of everyone else and then an indoor baseball game started and we finally headed back to our houses at 11:30 pm. After showers for mostly everyone, we finally got to bed around 1 am. 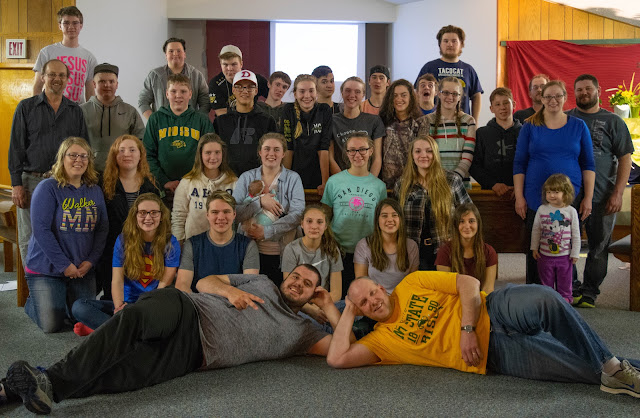