Today was a pretty average day, with finishing up school and homework for the week, working at the Thrift Store, and then working at the grocery store. However, the picture I took today is a little unusual. Let me explain it.

This message, #inittoenditX was a message I saw today, written on an arm. I looked into it a little more and I found some interesting facts.

Fact 1: Slavery still exists, and is more common than I thought.

Fact 2: If all of the people who were in forced labor, including domestic work and sexual exploitation, were put in one area, it would be one of the largest cities in the world.

Fact 3: Slavery is not only in developing countries; during the 2018 Super Bowl in Minnesota, over 35 women were rescued from sex trafficking, and almost 100 people were arrested.

I also found out there are many organizations trying to help and end human trafficking, including the END IT Movement- from whose website you can donate or create posters to spread awareness. Slavery isn't extinct, but we have the power to end it. 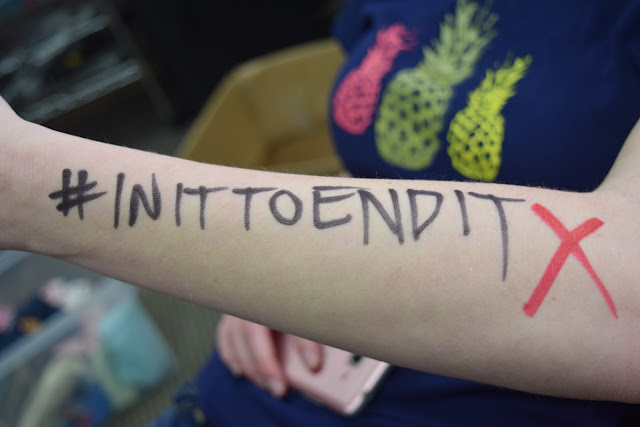 in it to end it slavery thrift store work