September 23, 2017, the day many people thought the world was finally going to end. And of course that's the day that they would choose to hold Dare2Share Live, in Eden Prairie Minnesota, as well as in like 60 other places across the US and in Puerto Rico. We left the church with our group of 14 at 6AM, Saturday morning, with our destination as Eden Prairie, Minnesota, near the twin cities. With one stop in Clearwater for bathrooms and donuts, we got to the church on time. We got inside, got our tickets, used bathrooms, and took our seats. They started out with some music and then had some speakers. We had a lunch break, for those of us who actually had lunches (none of us), and then went back in for one last session before hitting the streets. After we had finished it, they sent us out to knock on doors. First, our group went to get food, with half of us eating at Subway, and the other half across the street. We finally got going and got to the neighborhood where we were supposed to be knocking on doors. We said a prayer, and then split into three groups. Pretty much what we did is go from door to door, first asking if they had any food they could donate to PROP. Then, if they had any time, we would walk them through the Gospel and give them a card with more information. After doing it for about half an hour to an hour, we got back into the bus and headed back to the church, where we dropped off all the food items we had collected and went back into the area for the final session. We loaded back into the van and drove a little ways down the road until we got to a town with a Culvers and a Noodles & Co. where we ate. We got back to LRMC at around 10:30-11pm and we were all thankful for a nice night of sleep. 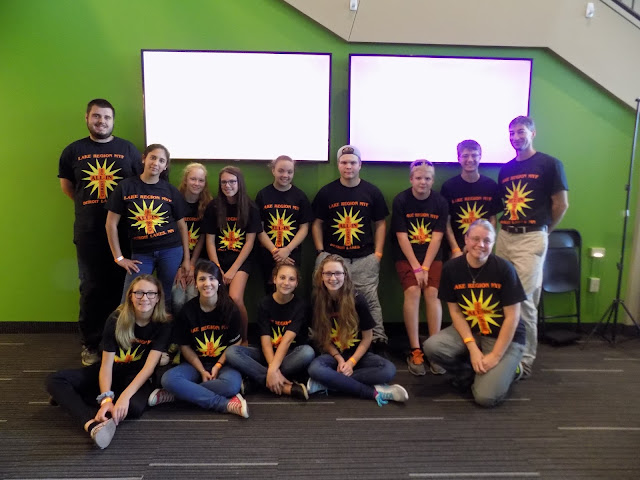