We woke up and had breakfast at the cafeteria again. Tovin tried speaking Spanish to the ladies who serve the food, but had troubles as they wanted to practice their English! The food was more normal today; oatmeal, canned pears, a slice of cheese, and milk again. After breakfast, we went up to the house where all the stuff is, and started cleaning. Our job for today was to sort a bunch of very large boxes of clothing, that were donated at one point or another. Then we came back to the apartment and started looking for a route to the nearest Wal-Mart. When we found one, we screenshotted the directions as none of us got service, and set out in the school bus. The scenery was amazing, and the weather was very nice and warm with a certain tropical feel to it. The only downside was the roads, which were small and busy which made going slow, but in the end, just added to the Puerto Rican experience. When we got to the Wal-Mart in Cayay, we found a parking spot and went inside. We did end up asking for direction once however. Thankfully, everyone knows where Wal-Mart is. As all the superstores are pretty much the same, Jason knew where most everything was, as he works at one back in Minnesota. We shopped for a few hours, which felt like a few days, as pretty much everyone had given us a list of things to buy. It was twelve thirty when we finally got out, and so the next big discussion was where to eat. Talitha wanted to eat at a Spanish looking buffet/steakhouse called the Pandarosa, but was down voted by everyone else wanting Burger King. The food was average, except for the BK fries, which are disgusting. There was also only one Ketchup packet, which was normal ketchup, unlike the first night which was a mayo, ketchup, and garlic mixture. We finished eating, then navigated our way back, having to turn around a few times, as we had no guide. When we got back to the campus, around two thirty, we unloaded and parked the bus. Then, Tovin and Jason went and set up a bathroom shelf, and a fan in Johanna and Katie's apartment. as Johanna and Katharina had no fan in their bedroom. Johanna and Katharina ended up leaving for the weekend anyway sooo... they won't actually being using it soon which kinda makes it a waste of time. We went back and painted a bunkbed, and some other stuff as well. However, we mistakenly used oil based paint, which takes days to dry in the humid Puerto Rican weather. We ended up having to use gasoline to wash our hands and the brushes. Tovin and Tevia went and played some basketball, but Jana wasn't feeling well. There was no one around, as school lets out at four, so Tovin and Tevia went exploring and found an unlocked door to the music room, which had a lot of instruments. As it turned out, the music instructor had left it unlocked so that we could go in and play with the instruments. Then around 6:40, we all came back to the apartment to have dinner, which was pasta. Jason, Tovin, and Tevia, went down to the prayer meeting at the chapel afterwards, but Tovin and Tevia came back as they were a little weirded out by it. It was very different, as everyone sits or stands in a large room and prays outloud at the same time while loud music plays in the background. Once everyone had come back and was ready for bed, it was time for lights out. 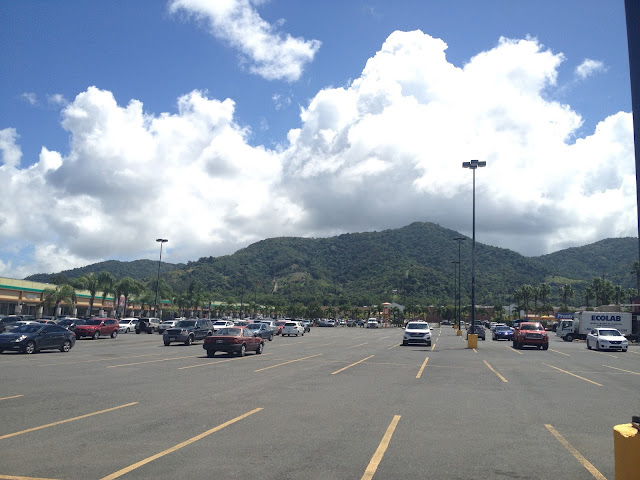