We woke up today to the sound of roosters crowing and someone using a very loud leaf blower right outside our window. We got up, then Tovin, Jana, and Tevia went up and got a free breakfast in the school cafeteria. Farina, Fruit Cocktail, and a choice of Chocolate or Vanilla milk. We would later find out how, well, 'interesting' the cafeteria meals could be. Then, Johanna took us on a tour of the campus. Alex interrupted half way through, with Johanna and her sister Katharina ending up following us around. We went and looked at the rest of the campus. Around ten in the morning, the grounds person, and also a pastor in training, Hector, offered to drive us to the store in Aibonito, as he was going to do grocery shopping for the school. It was a very interesting trip in a small school bus as the roads are very narrow, curvy, and have no shoulder. We got to the store and found all the groceries we needed. We got everything rang up and bought okay, with a few minor issues with the Credit cards. We were loaded in the bus, and started wondering how long Hector would take. However, Hector was shopping for the school, which we found out, takes a super long time. Almost thirty minutes later, he came out with about thirty six packs of coke and a bunch of other groceries. It turned out there had been some confusion with charging it to the school account, or at least that's what we understood from it. At least we understood why he kept telling us to relax. Then on the way back, Jason drove the bus, which made the trip take a little longer. When we got back to the school, we unloaded all of our stuff. Tovin, Jana, and Tevia then went and ate in the cafeteria again, which was rice and beans, canned pears, cabbage/corn shred, fried banana, and a choice of chocolate or vanilla milk. Then, after lunch, we went and had Hector help us find some tools. Hector and Jason did some cement drilling, while Tovin and Talitha got the wifi password from Katie, the big boss lady, as the one Alex had given us was incorrect. After a little break, we started cleaning a building that had been used as a science lab, but was now filled with junk, trash, and dirt. Tovin, Jana, and Tevia went back to the apartment while Jason and Talitha did a little more work. Then Talitha went for a hike while everyone else went and walked around the campus. Tevia had a tree infested with termites fall on her head while walking through the rain forest, which then got in her hair, causing the necessity to return to the apartment, where Talitha had returned and was stretching. Tevia took a shower, then everyone went out and played a little basketball, which only lasted about thirty seconds, as Tevia was unwilling to share the ball. Jason and Jana made pancakes, which was a nice 'normal' meal after all the other food. Then everyone took showers and just sat around until we turned out the lights. 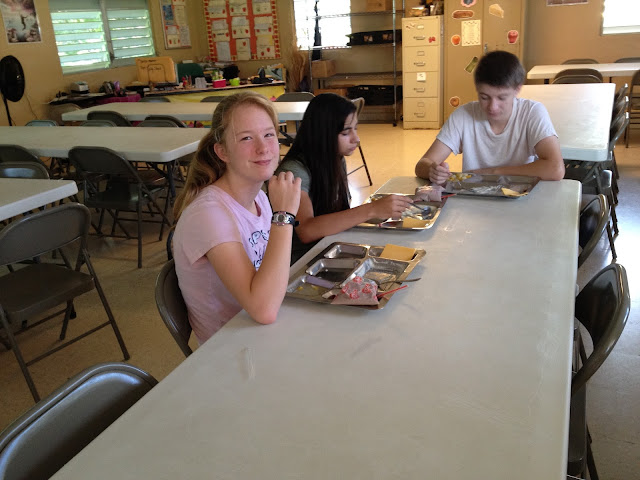