When we finally got up on Wednesday morning, Linda had a nice breakfast made. Tovin, who still wasn't feeling the best, sat on the porch in the fresh air after taking some pills. Linda had a friend named Dave who had agreed to drive us to the airport, and then park our car back at the farm community in Grey's Lake. He didn't want to take any money for it, but Talitha finally was able to give him $60. After saying goodbye to Dave, we started the airport part of our journey. We checked our one giant bag in, and then went through security with no troubles, except for Jana's bag which had a few books in it, which looked slightly like bombs, meaning she needed to have her bag searched. Once we got to gate L5 to San Juan, we just sat down and waited for two long hours until our plane started boarding. We got some lunch in that time and watched news of hurricane Matthew which was currently in Florida. Finally, it was time to board. We got on and they said it would be about a five hour flight. Each seat had a TV in the back of it, which played a few movies as well as a live map of where the plane was that included flying altitude and speed. For the most part, we were going about five hundred miles per hour, at about thirty-nine hundred feet. We flew right over Cuba at one point, which was pretty cool, as until recently, it was not friendly airspace. At around four and a half hours, the seatbelt light came back on and we started our decent. It was already getting dark when we landed at about 6:13 local time. We got off and headed into the airport, following the signs to the baggage claim area. We stopped for a bathroom right near about thirty slot machines, which was something we were not used to! After using bathrooms and with Talitha and Tevia having changed into more comfortable clothes, we went downstairs to the baggage claim. We ended up having a little trouble finding our bags, as they had sent us to the wrong baggage claim. We stood around for a few minutes trying to call the guy who was supposed to pick us up, but got no cell signal. We stepped outside into the passenger pick-up, and right away a man said, "You are Jason?" Our guide, whose name was Alex, brought us out to eat at a Puerto Rican restaurant along with his Mother, Paquita, and another girl, Johanna. Once we finished some very good food, we took off to Wal-Mart while we waited for Johanna's little sister, Katharina, to fily in from Orlando, at about 10pm, local time. Once we picked her up, we made our way through the mountains to the school and church campus in Aibonito, almost an hour away. We got into our apartment, made our beds, and fell asleep at about midnight. 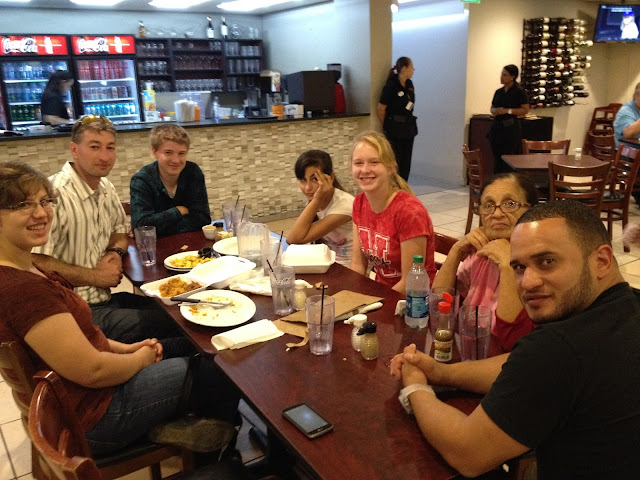