Today was Sunday. Pastor Juan Carlos said that he was going to pick us up at nine. But that's Puerto Rican time. So really he meant 9:30, or whenever he gets around to it. He showed up with a bus full of people, so we ended up following him in the bus. We got to the church, where Tovin, Jana, and Tevia went to the youth Sunday School with Katharina and Johanna. The lesson was about staying pure for your future spouse, just as the church needs to stay pure for Christ. Johanna interpreted, which allowed us to understand it. After that, everyone went into the sanctuary where the adult Sunday school was just finishing up. The music started, and it was very interesting. Everyone was singing a little off key, and very loudly. The Pastor was playing an electric guitar, an old man playing keyboard, and two kids playing drums. They provided an interpreter for the sermon, which was about how all the fruits of the Spirit come from love and faith. Or something like that. Then, after the sermon, we went just a little way up the hill, to a lady's house, which was the parsonage. The church had about 40 people, and only about 20 of them came up for lunch. There was roast ham with pineapple and cherries, pork, lots of soda, and potatoes, salad, bread, lots of cake, and ice cream. Once of the cakes was a triple milk cake, that had evaporated milk or something in it, and it was amazing. Then everyone got in their cars (or in our case, bus) and drove to the same supermarket in Aibonito. While we were there, Jason and Tovin figured out how to turn on the blinker lights and put out the sign on the bus, so were playing around with that. Then, we drove back to Pastor Juan Carlos' house. As soon as we got there, a few boys went out and got some horses from the pasture. They were trained to do a special run called Paso Fino. It was very funny to watch, but made for a very interesting ride. There was also a very loud and funny ping pong game going on. It was particularly funny when Juan Carlos Jr. and Diago, two of the Pastors kids, would get into a fight every time one of them would score. Then, around five, we got into the bus and went back to the school, stopping once in Aibonito for a picture with the giant sign. Katie had just gotten back from her weekend of partying in San Juan, so Jason talked to her for awhile about the trash disposal while Jana made pancakes for dinner. Then we Facetimed the grandparents, Bruce and Huldy, as we had not seen them in a week. After all that, we went to bed. 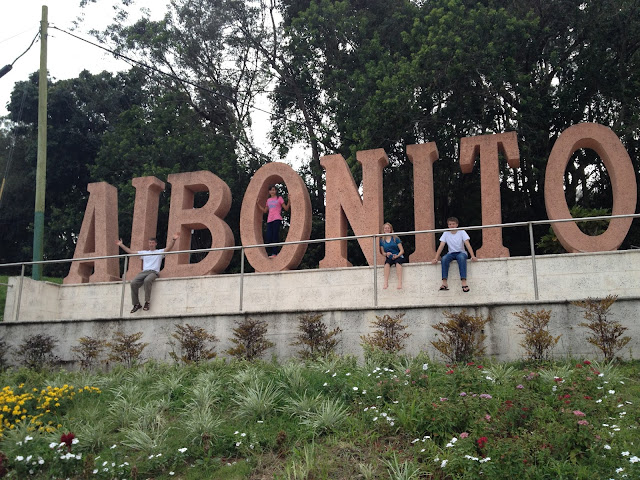 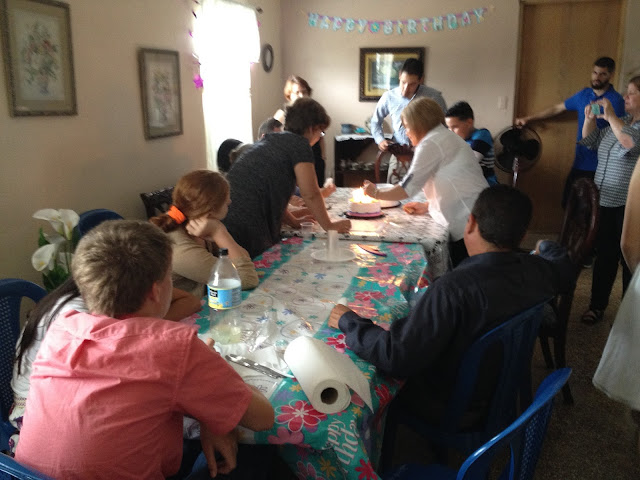 Note I: After church, as it is normal here, an old lady came and kissed us all on our cheeks.
Note II: After a lengthy discussion, we have decided that it is more of a brush of the cheeks than a kiss.
Puerto Rico 2016